Ask people to name a musical instrument synonymous with film noir, and it’s a safe bet no one will say the flugelhorn, the ax of choice for my man, Dmitri Matheny. It’d be the saxophone, by a landslide. Which is strange, because sax barely figures in scores from the classic era of film noir, roughly 1944-54. Orchestral strings set the tone, in the work of such geniuses as Miklós Rózsa (Double Indemnity), Franz Waxman (Night and the City), and Roy Webb (Out of the Past).

People hearing that saxophone aren’t wrong, however. It’s an understandable misconception, based on how the elastic notion of noir was integrated and adapted into the cultural bloodstream by crime writers, film and television producers, and jazz musicians. It’s a dark and twisted road that’s led us from The Killers (Rózsa, 1946) to Odds Against Tomorrow (John Lewis, 1959) to Taxi Driver (Bernard Herrmann, 1976) to Mulholland Drive (Angelo Badalamenti, 2001). In the roadhouses along the way, combos and arrangements have constantly changed—but the song has remained the same: you suffer for your desire … so you may as well suffer with style.

Dmitri Matheny and I charted this route years ago when we collaborated on a “Jazz-Noir” film series for SFJAZZ, which drew on our respective knowledge of music and film. I came away from the experience with a keener insight and deeper appreciation of the scoring of many favorite films. If our conspiracy struck the spark for this album, I’m proud of the small role I played and thrilled that you get to reap the benefit. I’m just tickled to be name-checked (between Herb Caen and Tony Bennett!) in the album’s centerpiece, “Crime Scenes,” a 12-minute suite that delves into the sexy and sinister side of San Francisco, featuring some amusingly “hard-boiled” spoken-word poetry, including a dame who will “draw a chalk outline around your heart.” It pays loving, backhanded tribute to my hometown, and local sleuths ranging from Sam Spade (The Maltese Falcon) to Mike Stone (The Streets of San Francisco).

That’s what I love about Dmitri’s take on noir—it travels the whole route, reaching back to caress the sinuous notes of the venerable “Caravan,” a Juan Tizol composition from 1936 made famous by the Duke Ellington Orchestra, then tracing that sultry promise forward to find Audrey Horne slinking around in shrouded rooms to Badalamenti’s score for Twin Peaks. In these grooves (can’t help it, grew up in a vinyl world), Matheny leads his crack crew through a sonic history of noir, with nods to composers ranging from Harold Arlen to Lalo Schifrin.

Matheny crafts an eight-minute Gold Medal paperback out of poet Dana Gioia’s “Film Noir,” a pungent roux of small-town trouble straight out of Black Wings Has My Angel, featuring a discontented dame who, “if she shot you dead would finish your drink.”

The extra kick in this road trip is the juxtaposition of venerable jazz standards (“Stormy Weather,” “Estate”) with unexpected, underappreciated gems such as John Williams’ gorgeous “The Long Goodbye,” composed for Robert Altman’s 1973 revisionist take on Philip Marlowe, and Stevie Wonder’s “Golden Lady,” from the same year. (If you don’t think “Golden Lady” is noir, revisit the lyrics: the poor sap is dying to sell his soul for his dream girl.)

Other surprises: a haunting version of Polish composer Bronislaw Kaper’s High Wall, the title theme for the 1947 Metro-Goldwyn-Mayer noir of the same name, and the band’s jaunty exit with “What Now My Love?” French composer Gilbert Bécaud’s renowned 1961 hit, covered by everyone from Shirley Bassey to Sonny and Cher, Herb Alpert and the Tijuana Brass to Elvis Presley.

Especially poignant for me is Matheny’s cover of Charlie Haden and Quartet West’s 1995 “Here’s Looking at You,” itself a tribute to the classic noir films that inspired Quartet West’s rich, romantic sound. It’s a beautiful, elegiac nod to a recently fallen comrade.

Like Haden, Dmitri Matheny is an artist who manages to find beauty blooming in the darkest corners. He’s a good man to have along if you’re planning a long drive through an uncertain night.

Known internationally as the “Czar of Noir,” Eddie Muller is a writer, producer and impresario. He is the founder of the Film Noir Foundation, which rescues and restores at-risk noir films from around the globe, and producer and host of San Francisco’s NOIR CITY, the largest festival of film noir in the world (now with seven satellite festivals around the U.S.). He frequently appears on Turner Classic Movies, and has lectured on film noir at the Museum of Modern Art in New York and the Smithsonian Institution in Washington, DC.

THE STUFF THAT DREAMS ARE MADE OF 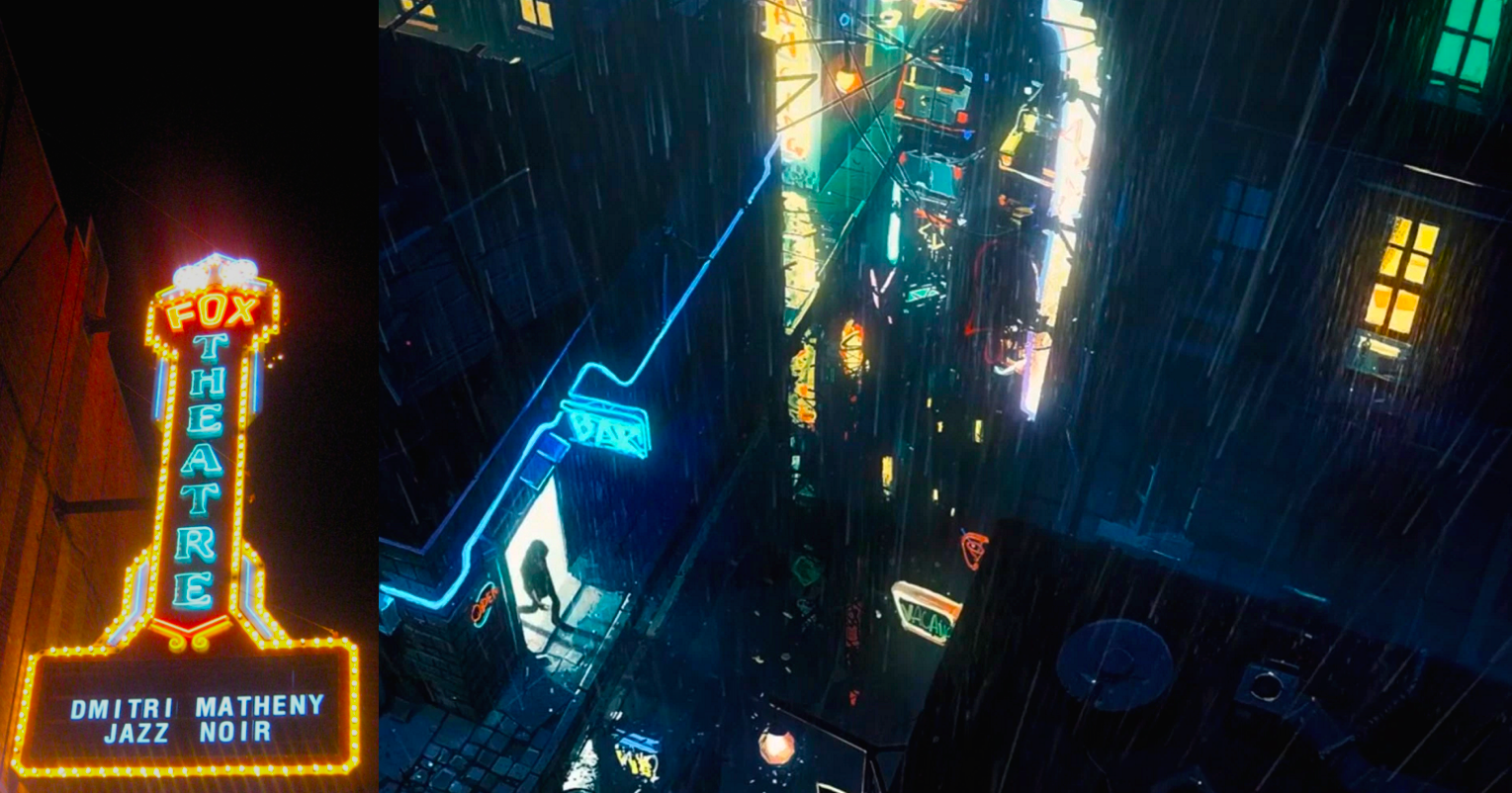 In the spirit of today’s THANKSGIVING holiday, I want to express my gratitude to all our supporters, friends and fans for helping to make JAZZ NOIR a reality.

We’ve finished all four recording sessions (twelve selections in all), and are now mixing the album!

Last night’s downtown photo shoot — under neon lights, in the shadowy streets — was a cinema-worthy thrill.

Soon we’ll ship the music and images to our art director, annotator and mastering engineer so they may begin their creative work.

We’re on track for a February 20 release and can’t wait to share it with you.

Watch our teaser trailer and pre-order yours HERE.

JAZZ NOIR, in the words of Sam Spade, is “the stuff that dreams are made of.”

Thanks for making our dreams come true! 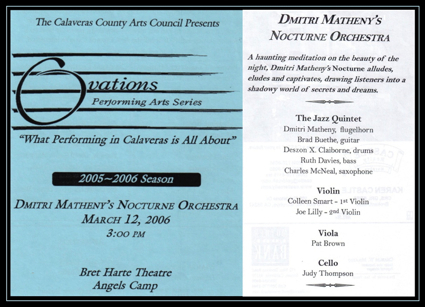 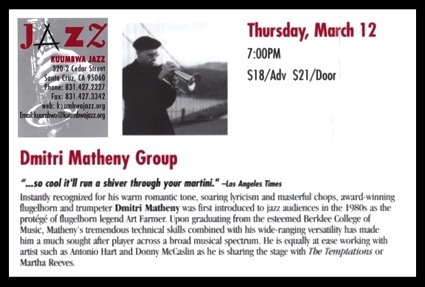 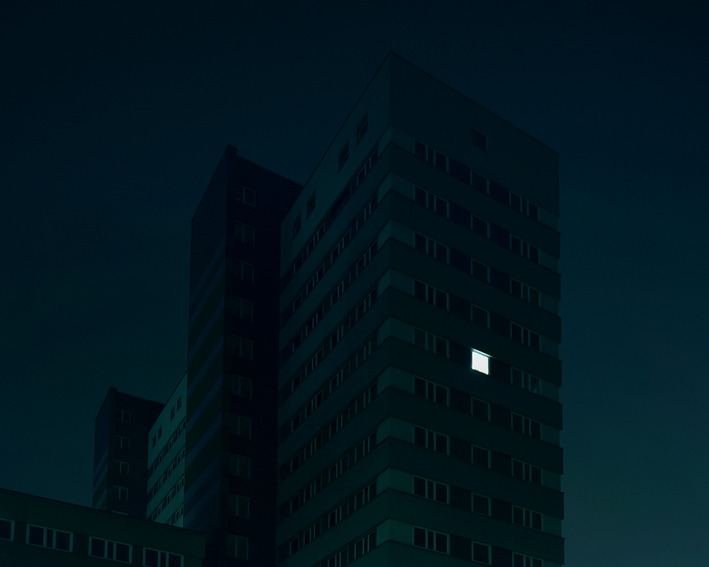 “The more powerful and original a mind,

the more it will incline towards the religion of solitude.” 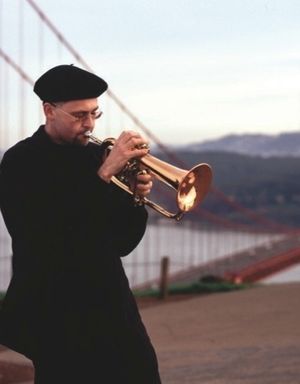 As a teenager living in Tucson in the late 1970s, it was hard to nurture dreams of becoming a jazz musician...more 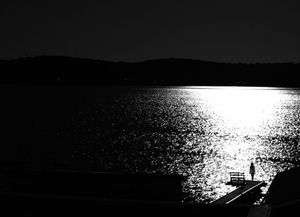 I went out to the hazel wood,
Because a fire was in my head,
And cut and peeled a hazel wand,
And hooked a berry to a thread;
And when white moths were on the wing,
And moth-like stars were flickering out,
I dropped the berry in a stream
And caught a little silver trout.

Though I am old with wandering
Through hollow lands and hilly lands,
I will find out where she has gone,
And kiss her lips and take her hands;
And walk among long dappled grass,
And pluck till time and times are done
The silver apples of the moon,
The golden apples of the sun.

Protégé of the late Art Farmer, flugelhornist Dmitri Matheny works along the edge between chamber music and jazz, creating a musical landscape found when lights are low. Matheny travels to a very dark place on his new album...[more]

Matheny’s latest release, Nocturne, travels from dawn to dusk, taking the listener on a warm and lovely trip through darkness...[more] 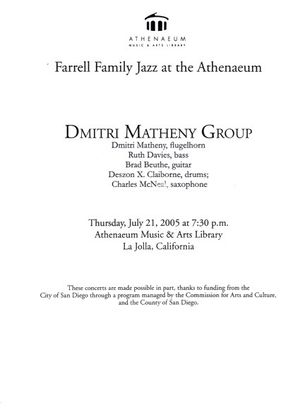 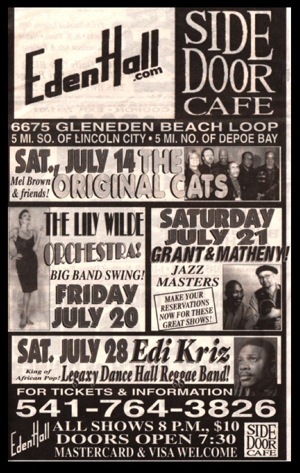 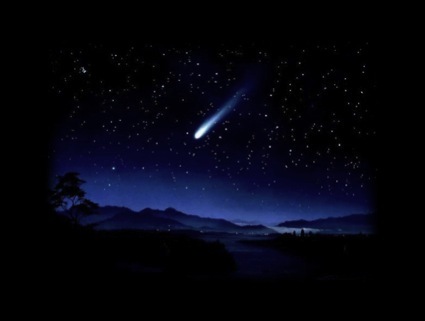 I saw a star slide down the sky,
Blinding the north as it went by,
Too burning and too quick to hold,
Too lovely to be bought or sold,
Good only to make wishes on
And then forever to be gone. 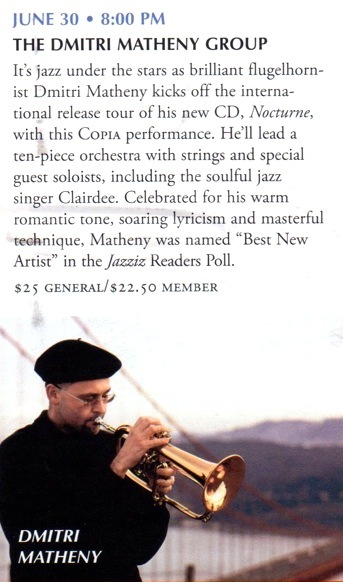 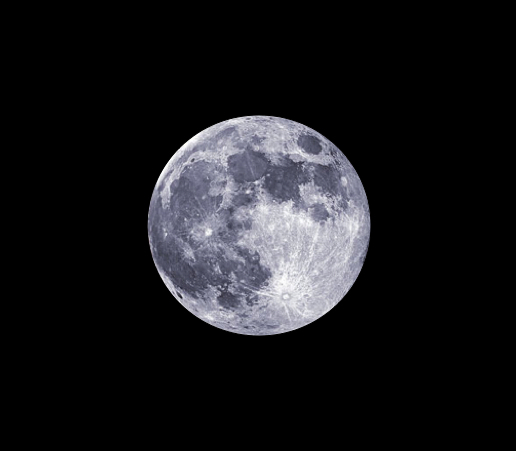 My dog and I are silhouettes

against the stars. He cocks his

head toward where the moon

will soon appear. And it does.

THE ENDLESS NIGHT: A Valentine to Film Noir 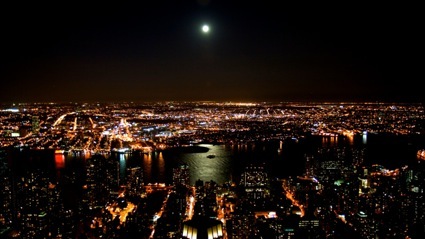 A thriving weed behind a dog-proof fence
A writhing dog behind a screen of weeds
The street needs people less and less
Their brave pursuits, their wretched deeds
They think the street is there for them
To bear their feet, to bear them on
"But bear with me," the pavement says
"I'm here at night. I'm here at dawn.
When you are here and when you're gone." 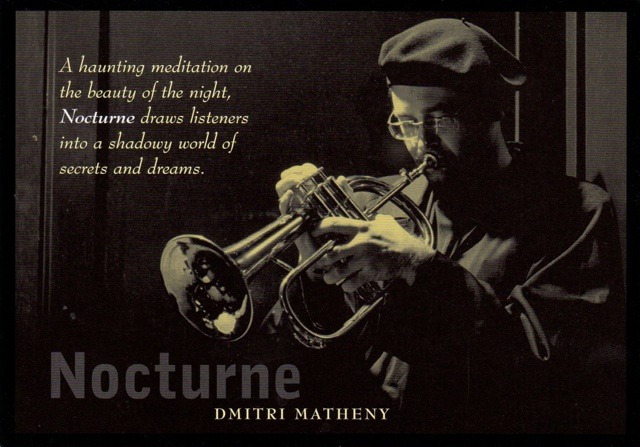 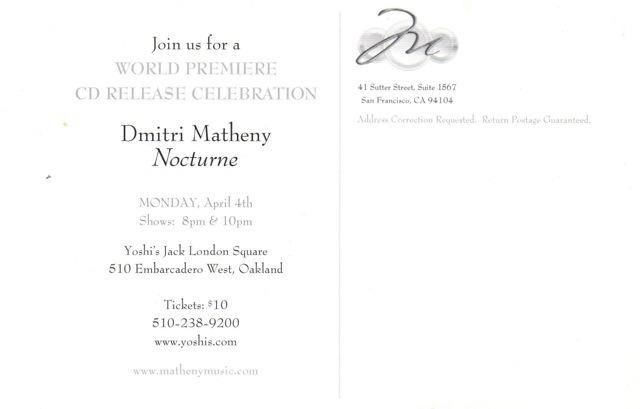 The Conduit communes with the metaphysical realm, channeling spiritual energy. He serves as a ritual messenger, our intermediary to the divine and liaison with the muses. Is he a metaphor or a functionary? Is he symbol or vessel? 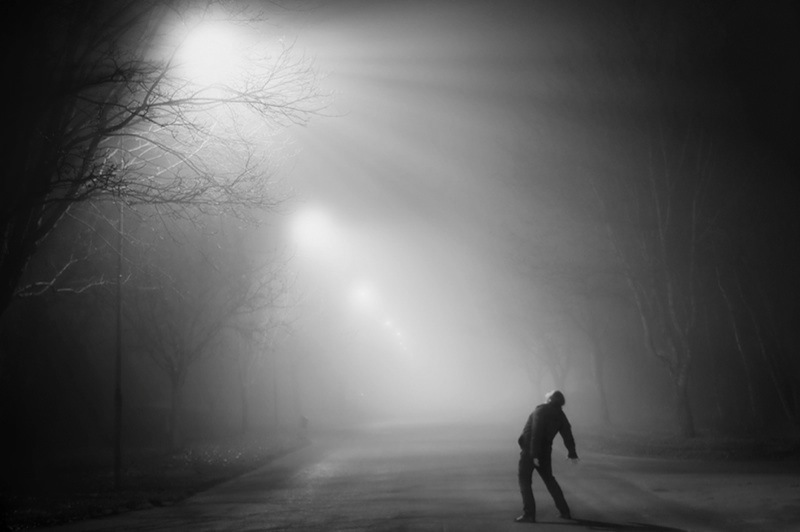 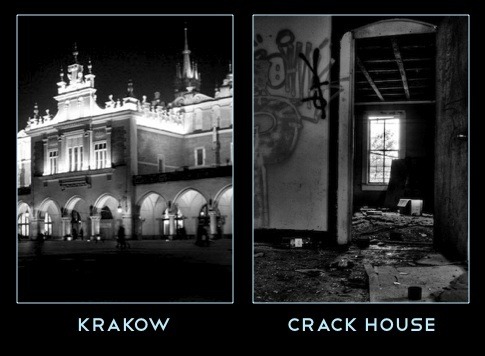 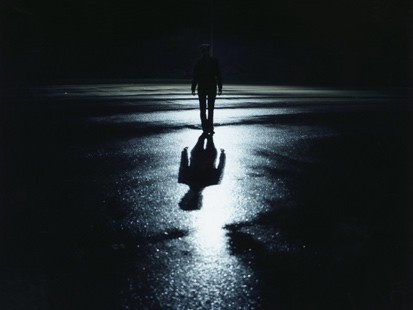 "I would hurl words into this darkness and wait for an echo, and if an echo sounded, no matter how faintly, I would send other words to tell, to march, to fight, to create a sense of hunger for life that gnaws in us all."
—Richard Wright

THE VOICE OF THE RAIN ~Walt Whitman | Leaves of Grass 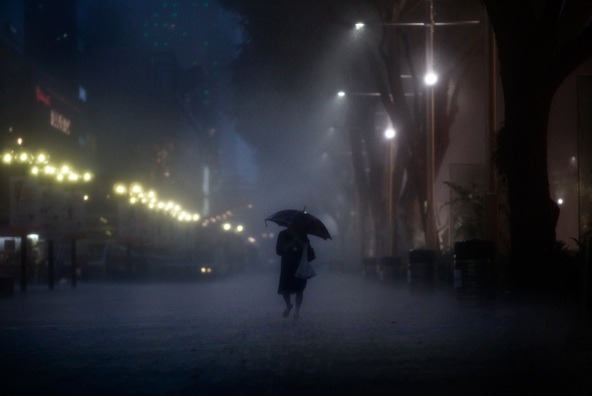 AND who art thou? said I to the soft-falling shower,
Which, strange to tell, gave me an answer, as here translated:
I am the Poem of Earth, said the voice of the rain,
Eternal I rise impalpable out of the land and the bottomless sea,
Upward to heaven, whence, vaguely form'd, altogether changed,
and yet the same,
I descend to lave the drouths, atomies, dust-layers of the globe,
And all that in them without me were seeds only, latent, unborn;
And forever, by day and night, I give back life to my own origin,
and make pure and beautify it
(For song, issuing from its birth-place, after fulfilment, wandering,
Reck'd or unreck'd, duly with love returns.)

COMIN' BACK TO ME ~Marty Balin 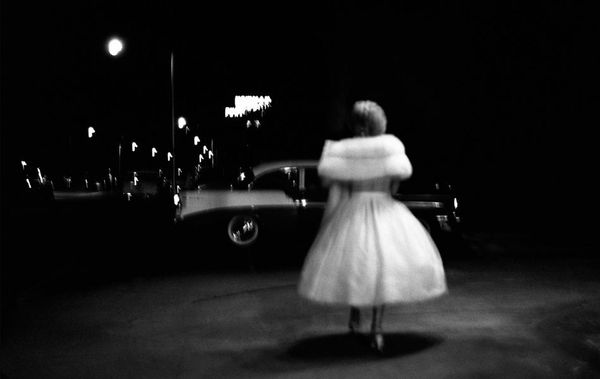 The summer had inhaled
And held its breath too long.
The winter looked the same,
As if it had never gone,
And through an open window,
Where no curtain hung,
I saw you.
I saw you,
Coming back to me.

One begins to read between
The pages of a look.
The shape of sleepy music,
And suddenly, you're hooked.
Through the rain upon the trees
That kisses on the run,
I saw you.
I saw you,
Comin' back to me.

A transparent dream
Beneath an occasional sigh.
Most of the time,
I just let it go by.
Now I wish it hadn't begun.
I saw you.
I saw you,
Comin' back to me.

Strolling the hills,
Overlooking the shore,
I realize I've been here before.
The shadow in the mist
Could have been anyone.
I saw you.
I saw you,
Comin' back to me.

Small things like reasons
Are put in a jar.
Whatever happened to wishes,
Wished on a star?
Was it just something
That I made up for fun?
I saw you.
I saw you.
Come back to me.

The Outcast is a vagabond who walks the lonesome road. Whether despised, disliked, or feared, she wanders alone, rejected and abandoned by all. Will she find acceptance? Will she succumb to depression? Or will she grow strong in her solitude? 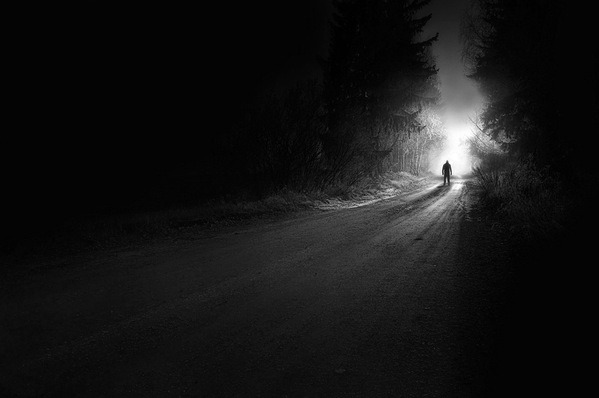